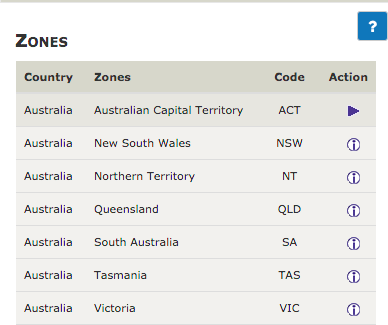 There are two kinds of zones in Zen Cart: zones and zone definitions (sometimes referred to as geo_zones).

For example, you may have a zone definition European Union which contains all the countries in the European Union. Then you might define zones for each of those countries, containing the provinces for that country.

The zones and zone definitions are used to couple Tax Rates and Tax Classes to geographic locations. For example, you may ship to all states in the USA, but since your store is located in Florida, you only need to charge sales tax to customers in Florida. You can define two zone definitions: one containing all the states except Florida, and one containing just Florida. Then you can specify the Tax Rate that the zone Florida should use.


Still have questions? Use the Search box in the upper right, or try the full list of FAQs. If you can't find it there, head over to the Zen Cart support forum and ask there in the appropriate subforum. In your post, please include your Zen Cart and PHP versions, and a link to your site.


Is there an error or omission on this page? Please post to General Questions on the support forum. Or, if you'd like to open a pull request, just review the guidelines and get started. You can even PR right here.
Last modified September 12, 2020 by Scott C Wilson (0aa7d271).